A short profile about my work as a professor in the UNLV Rebel Yell. Just click on the image to make it larger or full text is available below. 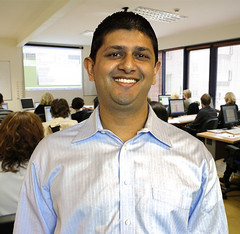 If someone told you that the kid next to you would soon be a professor teaching the very class you’re in, it might seem like a joke.

Although Suken Shah is known to crack a few jokes in class, he takes education very seriously — that’s because in the field of Internet marketing, UNLV alumnus Shah is now the teacher.

Shah, 27, has come a long way since his freshmen year at UNLV. As an adjunct professor, he has taught more than 160 students and as an advanced advertising specialist at Cox Communications together his work has generated hundreds of thousands of dollars in revenue.

He is also the president-elect for the Las Vegas’ American Advertising Federation chapter.

Shah’s parents came to the United States in the early 1970s. Originally from Chicago, Shah spent his teen years in Montana, where his family owns a hotel.

He took care of the property from time to time but said he did not think about taking over the business any time soon.

“I thought about it. And if it wasn’t so cold, I’d still consider it,” said Shah, smiling.

Though a career in hospitality was his plan B, Shah grew interested in a career in communication after being a part of his school’s yearbook staff, where the exposure to writing and selling ads led him to the career he would pursue in Las Vegas.

As a student at UNLV, he started as a public relations major but quickly realized that marketing intrigued him the most.

Shah earned a bachelor’s in communications studies with a minor in marketing in 2003 from UNLV and earned his master’s in business administration from the University of Southern Nevada in 2007.

He started teaching at UNLV as an adjunct professor shortly thereafter. His passion for learning drives him to pursue a doctorate in marketing, where he wants to focus in consumer behavior, social networking and social media.

Professor John Naccarato, Shah’s former professor and now Shah’s colleague, characterized Shah as a normal person but a steady and above average student. Naccarato said what makes Shah a good teacher is his effort to go the extra mile.

Noticing Shah’s innate motivation and eagerness as a student, it’s no surprise to Naccarato that Shah has become a reputable professor.

“It sounds cheesy,” Naccarato said, “he is willing to share what he has learned.”

For the colleague, one of his great attributions is his sincerity and wanting to help students make their paths easier.

“He is a really giving person,” Naccarato said.

And his passion for education and spreading knowledge is obvious. He talks with great enthusiasm when referring to why he loves what he does.

“I want [students] to have tools they learned in class that they can use the next day at work,” Shah said.

Shah has earned a stellar reputation as a professor yet approaches the topic with humility. “I’ll let my student’s evaluation dictate that.”

Students of Shah’s describe him as knowledable, funny and an overall great teacher that provides real world scenarios and great tools to expand their knowledge of Internet marketing.

He tries to keep an open mind and said that every semester that is room to improvement. Shah said he came a long way from his first semester to now.

“You have to be flexible and adjust yourself based on the group dynamics,” Shah said, adding that he loves every aspect of teaching. “It’s a challenge every semester.”

“The thing I changed the most is how I cover the material,” Shah added, referring to the fact that a text book is no longer a required material in his class.

Shah’s involvement with the advertising business reflects his cultural upbringing — he is involved with the Indian Chamber of Commerce.

Shah, who is fluent in both English and Gujurati, an Indian language, is aware of the cultural differences between the American and Indian cultures and said “‘The business’ fundamentals’ don’t change. You don’t lose that in translation.”

Shah said being president-elect of the local AAF chapter would give him the experience to run an organization of this magnitude and meet people.

Shah reinforces the fact that success in your career isn’t just about what you know but who you know.

“If you want to stay and work in Las Vegas, you [need to] get to know the industry and the people you are going to work for,” he said.

Even though he is a young professional, it does not stop him from being successful and respected among his peers.

“It is [hard] sometimes, but I have been working on the business for so long that I have been gaining experiences,” Shah said.

In the future, Shah sees himself focusing on research, consutling and teaching.

“Hopefully [be] out of school,” said Shah of his ambition to earn a doctorate at the end of his name.

Wherever Shah ends up, it’s without a doubt he’ll make his family, colleagues and students proud.

Naccarato is especially proud of Shah and the wealth of knowledge that he brings to the table. Reflecting on his objective as a teacher, Naccarato said, “That is why I do this — to see them transition from students to professionals. [And Shah] is a pleasure to work with professionally.”